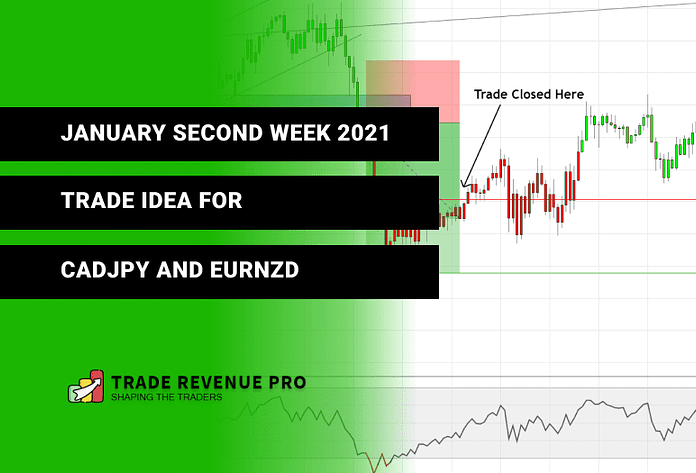 This is the first blog post for the weekly market review in 2021. Every weekend, we’re offering a trading article to talk about the trades we’ve been placing in during the last week along with the two trade ideas for the coming week.

The primary intention of these articles is to teach you how to trade and handle trades in the FX market, and these articles do not provide any trade signals. Use these blog posts to grasp what it actually means to trade on the forex market.

With that, how is the first trading week in 2021 be so far? Let me know in the comment section.

For us, it was a capital preservation week. We had three trades on our radar. Among those opportunities, we missed a profitable trade and we had one winner and one loser.

First of all, you guys can see that GBPAUD was in a very heavy downtrend with price making a series of lower lows followed by a series of lower highs. But as the price is getting closer to the daily support level, the extension movements have begun to get smaller whilst the retracements are getting deeper and deeper. This is a strong sign of the lack of sellers. With these confluences in mind, we intend to carry out a long trade at a break above the level of the local structure. But, unfortunately, we have missed this trade.

With that let’s move into the second trade.

From the left side of the chart, we can see that GBPUSD was in a strong uptrend. But as price approach to the channel top trend line, price action started to slow down as a result of this price behaviour ascending channel started to form. This is where we started to draw local structure level and focus on going short upon the breakout of the local structure level to the downside. As expected we short and price almost hit our take profit, but unfortunately price retrace up and hit our trailing stop loss for +1.23R.

That is the second trade of the year 2021, Which went wrong, but luckily, we were able to reduce our losses. As the previous trade on GBPUSD, AUDJPY was also in a clear uptrend, however, when the price met the top channel, price action began to show some weaknesses. The consequence of this price action is the triangle pattern. Plus RSI indicator also indicates divergence and, along with all the trading confluences, this is an area of value for me. So I went short on the break of the level of the local structure. Although the sellers moved the price for hours, the buyers came back strongly and moved the price strongly against us. That’s where I cut losses for-0.5R.

With these two trades closed, we were able to gain +0.73R for the week.

Now let’s take a look at the trade ideas for the week ahead.

CADJPY – Buyers are Struggling to Break Above the Local Structure Level

Price Consolidation – Look at the left side of the chart, the price was in a strong uptrend with strong extension moves followed by the minor retracements. But as price met with the daily resistance level, the extension moves unable to keep it up and on the other side retracements started gets deeper indication aggression of sellers.

RSI Divergence – RSI started to show divergence, which objectively describes the lack of bullish momentum in this uptrend.

Market Forecast – It is clear that at the moment CADJPY is in a strong uptrend with a series of higher highs followed by a series of higher lows. However, after considering the above trading confluences, it is obvious that the sellers are struggling at the moment. The reversal would then be verified by a break below the marked local structure level. If this does not happen, the current trend is still valid.

Key Level – At the moment a strong bearish trend losing it’s momentum as price met with the diagonal support comes from the daily chart.

RSI Divergence – This time RSI divergence is very clear. This confirm the previous trading confluence as well, and this indicate the lack of bearish momentum.

Market Forecast – When considering the above trade confluences, a break above the local structure level confirm the validity of the reversal. If not we can expect a continuation of this downtrend.