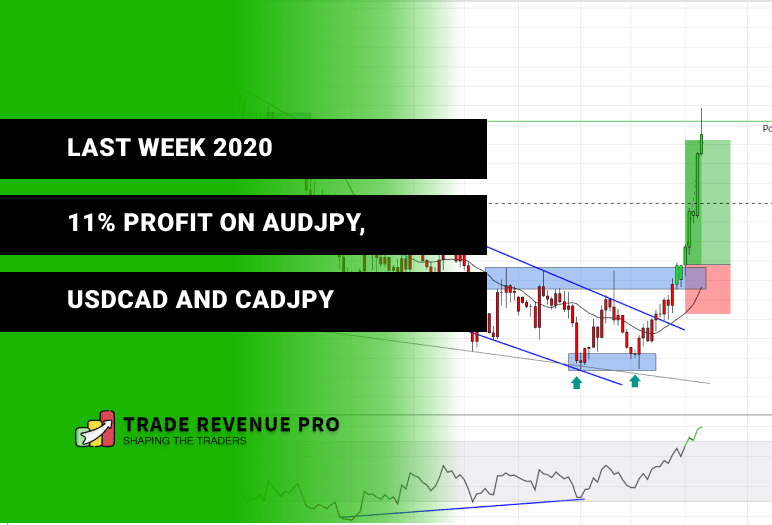 We would like to wish you all a very merry Christmas.

The Pandemic situation across the globe has challenged us all in so many different ways, and for those of you who have been financially, mentally and physically affected by this global crisis, we are sincerely thinking of you.

We would hope that 2021 will offer a solution to the crisis and return health, joy and wealth to those who have had their lives turned upside down in 2020.

With that, I hope you all had a profitable trading year so far. At the moment the Forex market is closed until the new year. Yup this is vacation period for traders. Hence in this article, we are not going to talk about the trade ideas for the week ahead, instead, we are going to look at the trades we had in the last week before the market closed on Thursday midnight.

With that Let’s move into the first trade,

At a glance, you can see that buyers were struggling to move price further higher as price actions met the resistance level which comes from the daily chart. On that point, RSI also forming the divergence which indicates the lack of buying pressure.

All of these price behaviours lead to a range bounce market around the daily resistance level. Have a look at the local structure level. Break below this level is what triggered us. We go short using a retracement entry technique (we use retracement trade entry technique when we don’t have a favourable risk to reward ratio). As you guys can see price almost hit our take profit, But unfortunately, a microeconomic event hit us and the price began moving dramatically against us. We have been able to gain slight +0.5R from this trade since we moved the stop-loss with the market structure.

What do you guys think about this trade? It’s a Text Book Trade, Right?

Now have a look at the chart above. A head and shoulders pattern at the resistance level comes from the daily chart is what encouraged us to analyse this chart and we were able to come up with perfect trade idea for this currency pair.

We placed a short trade at the local structure level after the price broke and closed below the local structure level. As you guys can see, the price has been slightly retraced and our entry order has been filled. But it wasn’t an easy trade, Price began to consolidate on trade entry, suggesting a lack of selling pressure. This is where we moved stop-loss to a few pips above the top of the range. Have a look at the chart above.

After the second test of the range top, the price started to move in our favour sharply and hit our take profit for massive +3.66R.

Have a look at the massive RSI divergence which indicate the lack of bullish momentum. This is what inspired us to observe this currency pair. Also, have a look at the retracements. In the beginning, it was small and when price approach to the marked resistance level they become deeper and deeper indicating strong selling pressure.

Based on these trading confluences, we placed a short trade after price break and closed below the local structure level and as you guys see, although price action showed strong bearish momentum upon trade entry, it ended move against in our favour. Since we follow our capital preservation rules we were able to reduce the loss and on this trade, we lost -0.3R.

This trade is also similar to CADJPY trade. We placed a short trade after the price broke below the local structure level targeting the previous swing low. Upon the trade entry price started to consolidate (it’s a tight range, we manage and cut loses in the 15 minutes chart) and this is where we moved stop-loss order to few pips above the range top to prevent from unnecessary losses.

Finally, as we expected, the price ended moved against and hit stop loss for -0.4R which is not bad trade because we did cut the loses early which prevent us from having -1R on this trade.

This is a painless trade and take-profit order filled within a few hours. Actually, we talked about the descending channel pattern and Massive RSI divergence on the USDCAD in last week trade idea article.

Now have a look at the trading confluence here,

As you guys can see in the above chart, we were able to gain 2.4R on USDCAD.

Now it’s your turn, How was your trading year been so far? Let me know in the comment section.